All experienced statisticians or data analysts have heard about those one or two instances where a coding error led to an entire conclusion changing, even leading to a retraction. It’s the sort of stuff that keeps people up at night. Unfortunately, not many of us think about this stuff until we realize it’s highly possible that it could happen to us (p < 0.05).

So it really is worth spending the time setting up principled statistical workflows that will reduce the likelihood of making errors. I’d like to quickly go over a few things that I’ve found helpful over the years, and I’ll first start with data management/entry and then move onto analysis workflows. I largely consider this to be a living document, and I’m sure many people who will read this will have far better suggestions, so please leave them down below in the comments!

Summary: Be Consistent With Everything

Setting Up a Principled Statistical Workflow

Here’s what I’ve been doing for a while and what seems to work for me (none of these ideas are originally mine, and I actually picked them up over the years from others’ advice, some of which will be linked below).

First, I will create a folder with the title of my project, and usually have an RStudio project set up in there (while this advice is for people who use R, I think the general approaches may be useful). This folder will contain many other folders (more on that below), so the structure will end up being a bit complex.

If this ends up confusing you, you can just scroll all the way down to see an image of what the folder structure looks like.

This not only sets the working directory, but gives you much more control over how you can save your files from any place within the hierarchical structure. It will create a file inside the main project folder called .here, which will indicate that this is the top level of the hierarchy.

Then, I will have create a README.rmd file in the main project folder with updates on what I’ve done and what I still need to work on, so I will remember and so others will too.

Next, I’ll set up a Data folder inside the main project folder. This is where all my data/spreadsheets/.txt files and data dictionaries will go. The original data files will stay inside this folder, while I create two other folders inside this Data folder called Transformed and Models. In Transformed, I will typically save .rds files that were a result of cleaning and transforming the data, including imputing missing data. I will touch more on exactly how I do that later below. Models will obviously store fitted models and any validation of those models.

Now, back to the main project folder, I’ll set up another folder called R. This will be where all of my .R scripts live. I will number them consistently, like so

All potential R packages and custom functions that I need will belong in 01-functions.R. This .R file will only serve this purpose and nothing else. As you’ve guessed by now, the other .R files will be doing the same, strictly for very specific purposes.

However, I will not be running each of these .R scripts individually, line by line.

Instead, after I’ve created all these files (figuring out what I need to do carefully and writing it down and annotating it), every single .R file except for main.R will have the following script (or some iteration to match the name) at the beginning

and this script at the end

You’ll notice several things, first I’m once again calling the here package and telling it that I’m working within this folder, and then I’m calling the 01-functions.R file by using the source() function, but also notice how the source() function is followed by a here() function, this here() function allows you to fully control files in a specific folder from anywhere else, without having to actually be in that folder. So, suppose I was in the Main Project -> Data -> Models folder and I had my working directory set there, which is pretty far from the R folder, I can still using functions like source(), save(), etc. and call or manipulate files from a totally different folder by specifying the hierarchy using here().

This is how I will always be calling the necessary packages and functions I need from every R script. the next line

is designed to catch any errors that occur inside the .R script and save them to a .txt file in that same R folder. So here’s an example:

I will admit that it is not perfect at capturing errors but usually if something wrong occurred when I fit my simple regression there, the file would catch the warning so I would know that something went wrong.

Why might I want to catch these errors and save them if I ran the scripts?

This also helps us automate the entire workflow once we’ve carefully set it up. After each .R script has one of these error-catching scripts, we can run everything from main.R with one command

So, now the Error folder will contain .txt files with any errors or warning messages.

Typically, when I’m setting up a new project, I will also add a few other folders such as an Outputs folder, where I will save tables, and graphs and a Report folder, where I might be working on a manuscript.

Now that I’ve mentioned my hierarchy and how I catch errors, I can mention some other things that I believe are absolutely heinous practices. Many people often will run an entire analysis and have several objects/vectors stored in their Global Environment. Whether they’re taking a break or finished with the analysis, so what they’ll do is click the save button on top of the pane and “Save the workspace image”.

This is a horrific practice and you should never do this because it can lead to several problems such as:

Now I have saved my imputed dataset only as an object called z.rds and it is saved in the Data folder even though I would hypothetically be working from the R folder.

Also notice that I use the beep() function from the beepr package, which can be quite handy to let you know a particular script or analysis is done.

Next time, if I cleared my entire global environment and wanted to ONLY load the imputed dataset, I would simply have to just click on z.rds and it would load into the environment or I could use the following command

This gives me full control over my environment, and it’s also why I encourage people to turn off the automatic prompt to save the workspace that RStudio gives you by default (I think even Hadley Wickham has said the same).

So if I now wanted to include the imputed dataset into one of my .R scripts that I am trying to automate with one command, whether for reproducibility, or speed, etc., I could do it with absolute control.

This is also how I save my models and how I validate them, which is especially necessary because they can take a long time.

Here’s an example of a script that would be in the 04-analysis.R script, I’m leaving out the error script now to avoid making this too long. I don’t need to load the brms package because I’m already calling it from the first .R script, 01-functions.R (but I’m just showing it for now to avoid confusion) and then I am saving it in the Models folder which is found in the Data folder. And again, the beep() function would let me know when the script is over, and scripts like this can take very long.

So I’ve saved the full contents of the model, which are usually several gigabytes large in the Models folder.

Once I’ve written all my analyses scripts, I’ll typically create a subfolder in the Outputs folder called Figures and then Tables and save them appropriately with the help of the here package.

Then, I’ll go back to the README.rmd file, make notes of the hierarchy of the entire folder and subfolders, and what has been done and what still needs to be done.

Now, suppose I deleted all of my saved models, imputed data, graphs, and tables, and only left the original dataset. Anyone could go into my project and simply highlight the entire main.R file and run it, and they would get all the same outputs and models. Although, it might take them a long time…. depending on what they’re working with.

But anyway, here’s what my project folders tend to look like. 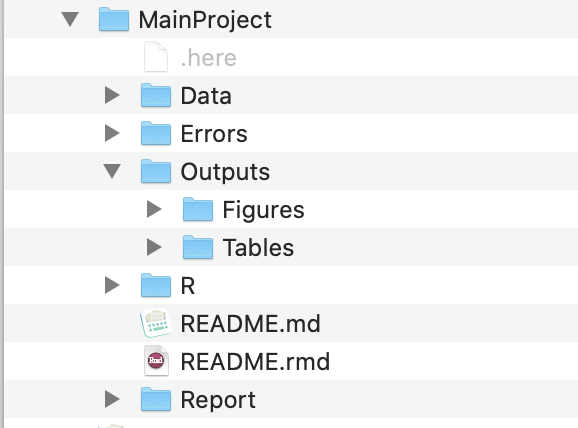 Also, it should go without saying that sharing your data and code will help catch errors before it’s too late!